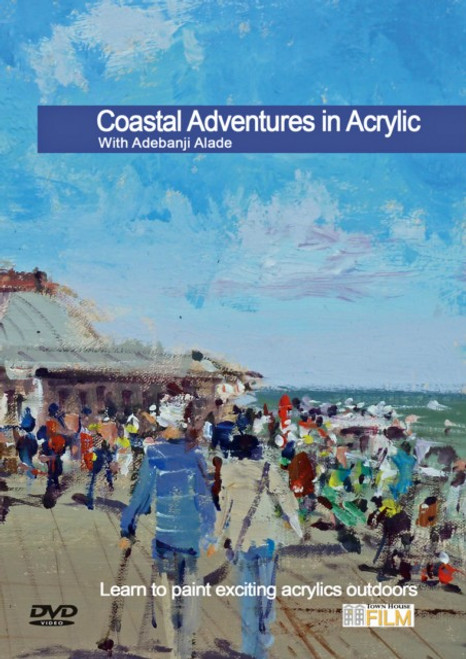 Adebanji Alade is one of the most exciting new artists in Britain today working in both oil and acrylic - as featured on BBC 1's the One Show! He has won a clutch of awards for his dynamic, mostly urban, paintings that are usually full of people and life. Not that Adebanji paints his people with solemnity and precision. Often as not they are applied in a frenzy of colour and brushstrokes and are little more than dabs of colour. But the results are spectacular and it is this highly energised whirlwind style of painting that he demonstrates on this his first teaching DVD.

On this DVD he travels to the quintessentially English seaside resort of Cromer on the north coast of Norfolk. The DVD was filmed in the middle of summer and Cromer was teaming with holidaymaking families making it ideal territory for Adebanji. He paints his first two pictures on Cromer's Edwardian Pier before moving along the promenade a little to capture an amazing view of the pier and promenade from a high vantage point complete with scores of bustling visitors. He finishes up with a beach scene complete with fishing boats.

Adebanji is a provisional member of the Royal Institute of Oil Painters.

Revealing The Secrets of Acrylics WIth Soraya French SWA

Acrylic Landscapes With The Wow Factor - With Lynda Appleby

Acrylic Landscapes With The Wow Factor - With Lynda Appleby

Light And Atmosphere In Oil Landscapes - With Chris Daynes

From Dynamic Sketch to Finished Painting With Chris Forsey R.I.

Painting The Light in Oils - with Peter Wileman